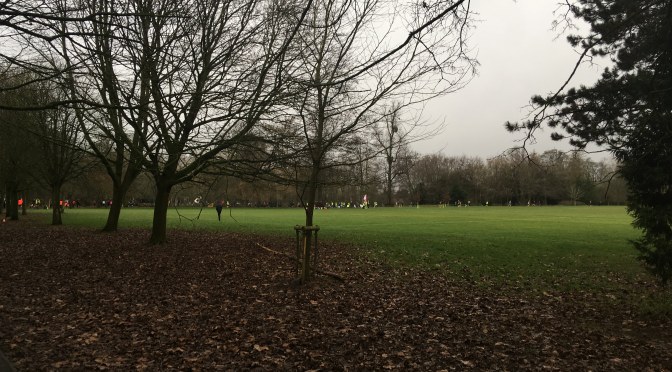 After a break of over 2 months I am back on the tourist road again at one of the oldest parkrun events in the UK namely Basingstoke. It’s first event was back in July 5th 2008 and it was the 10th established parkrun event with now 587 in total in the UK alone!

Basingstoke is the largest town in Hampshire (Portsmouth & Southampton are both cities) with a population of 113,776 and is located almost equal distance apart between Southampton and London on the M3 corridor!

So before the second world war Basingstoke was a small market town of about 13,000 people, but like a lot of towns in the South East I have visited due to expansion plans developed after the war to accommodate the London overspill towns like Basingstoke grow and developed out of all recognition to now the bustling town you see today!

The main location for Basingstoke parkrun is based at War Memorial park (when other park events take precedence the alternate venue is at Crabtree Plantation) that history dates back to 1765 when a then William Russell purchased Goldings House with its 6 acres of gardens! 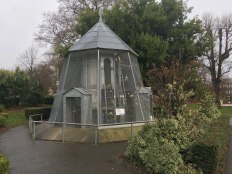 Now in modern times, “In 1921 Basingstoke Corporation purchased the estate from Thomas Burberry to provide a fitting memorial to those who had perished in the Great War. The War Memorial Park was designed by J A Smith FRIBA and the War Memorial (Winged Victory) by Louis Frederick Roslyn was erected at the entrance. In 2001 funding from the HLF allowed the 18th-century landscape parkland to be restored.” (extract taken from Parks & Gardens website)

Months ago I arranged a reunion event with some of the best parkrun tourist friends a man could wish for at their home parkrun of Basingstoke! The first time I met them all was at one of the last events to be ever held at Hatfield Forest, Hertfordshire back in August 2017.

A special mention to Matthew on running your 100th Basingstoke parkrun on Saturday (picture below left wearing white running cap) and Carl (picture right with woolly yellow tourist hat) all the best in a few months time when you reach the outstanding milestone of 500 parkrun events completed!!!

Finally on the subject of tourism next time you are on the website for parkrun UK most events page a good number of park runners on that list come from Basingstoke with apart from my friends there is Paul Fielding leading this list with a mind-blowing 426 different UK parkrun events completed, simply wow!!!!!

It was all my pleasure to meet Lynn Brastock who last week reached the amazing milestone of completing 500 events with 487 run at Basingstoke, you are indeed an inspiration to us all Lynn!!!! 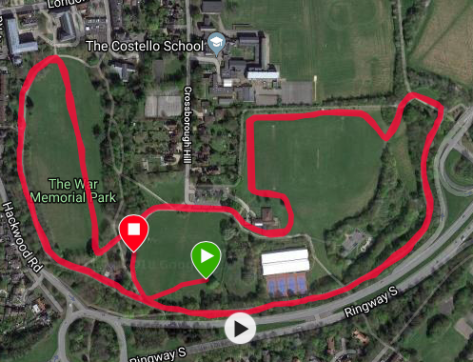 This course comprises of just over 2 clockwise laps of the perimeter of War Memorial park that is lightly undulating in nature. The course used this week was their summer course that consist of about 70% tarmac 30% grass running surface! 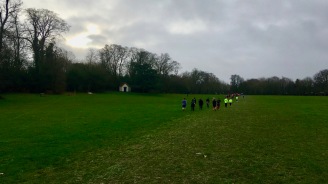 Overall a good course to get a quick time, with enough going on to keep most runners interested between changes of running surfaces, treelined paths and a bit of a hill test!

My time summed up where my fitness is at present, with this being my first outdoor 5k since Catford parkrun back in November of last year, time 37:42

There is a small free car park Crossborough Hill post code RG21 4AG that is close to the start of this event, but as they state if you can use other modes of transport to get to this event! There are toilets are available at the park that is situated adjoining the tennis club building.

A top tourist tip when traveling any distance by car it always good to factor in a comfort break, in Basingstoke case there is Fleet Service station that is just a few miles before the M3 Basingstoke exit if you are coming from London direction!

For the post run coffee they retired to The Tea Bar, 9 London road, RG21 7NT, in my case I followed my friends half mile or so into town to The Maidenhead Inn, Wetherspoons for a lovely cooked breakfast and a chat!

I would like to thank this weeks run director Helen Cameron and  her team of volunteers for doing an outstanding job supporting 602 runners on the day!

My tourist friends I would like to say a big thank you for giving me the warmest of welcomes and I very much look forward to the next encounter together on our tourist journeys!

So if you want to visit a top founding UK parkrun, meet a lovely community then Basingstoke has got to be high on your list to tour, you have been told!

What next for me, I will be taking a more relaxed approach to touring with no schedules set, but rest assured one day I may well be running at your event, but until then happy park running everyone 🙂

One thought on “Basingstoke”

running blog for everyone

Stopsley Striders jogging club is a Luton based club that was formed in 1982 from the embers of a local jogging course organised by local international athlete Tony Simmons.

We now have a membership of over 200, of all abilities. County champions to those who just run to keep fit or just to complete a fun run. Our main aim is to keep running fun and to enjoy ourselves.

My home parkrun that I am very proud of is going from strength to strength with now regular attendances of over 300 runners every week   Home Page.

My home junior parkrun that’s first event was held on 01/07/2018 and great to see so many of our juniors enjoying this every week :)